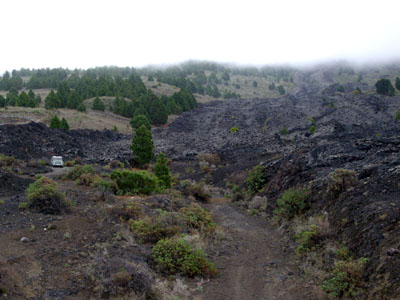 Ladies and gentlemen, can you spot the lava flow in this picture?

This lava flow at Fatima in El Paso is from the eruption of Volcan San Juan (St. John’s volcano) in 1949, but the whole island is volcanic. And, geologically speaking, it’s still in nappies.

The very oldest rocks on the island formed as a submarine volcano, some 3 three million years ago. Of course most of it’s buried deep, but if you know where to look, there’s a little patch of it you can see in the Barranco de las Angustias (the big ravine that drains the Caldera). Apart from that, the northern end is the oldest, at a mere 1,500,000 years old. Most of the south is younger, at 700,000 years old, give or take. And just to confuse the tourists, the Cumbre Vieja (old ridge) is younger than the Cumbre Nueva (New Ridge).

And the youngest bit of the island is Playa Nueva which means (very) New Beach. It was formed when Teneguía erupted from October 26th to November 28th in 1971. It’s just 37 years old – younger than I am. Luckily the eruption only killed one person, an old man who got too close and suffocated. My husband was a teenager and remembers it well. You could here the rumbling from Breña Baja, and the whole family went to see the show from the higher volcano of San Antonio.

Today, plants are just beginning to colonise the area near the cone, and the red rocks make the surrounding area look like Mars (See Which Planet Are You On? ).