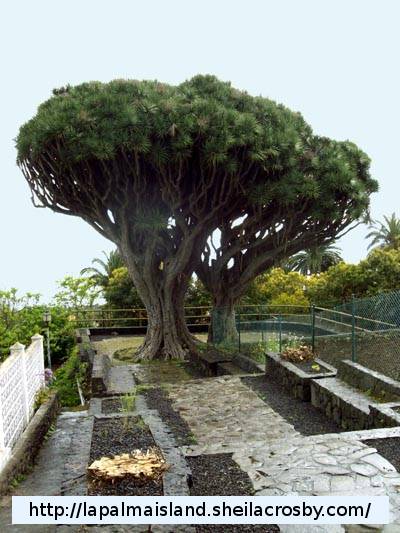 These trees stand in Breña Alta, just off the minor road which winds over the central ridge to El Paso. They grow so close together that it’s hard to tell where on trunk ends and the other begins. 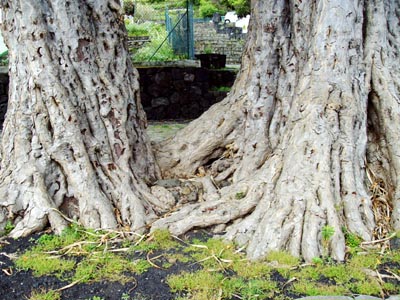 Of course there’s a legend associated with the trees. Two brothers lived nearby, and were very close, but they fell in love with the same gorgeous girl.

Oh dear. You can already tell that this doesn’t have a happy ending, can’t you?

The girl was fond of them both, but she had the sense not to keep them dangling. She chose one, and they were married, but as they walked to their new home in the dark, the spurned brother attacked. He killed the new bridegroom, and tried to rape his sister-in-law. She got to the kitchen knife first, so that was the end of him.

The new widow honoured them both by planting these two dragon trees. As the cuttings grew, she watered them and they grew tall from the fertile soil and her warm memories. They say that the brothers’ blood still flows within their trunks and gives them life. 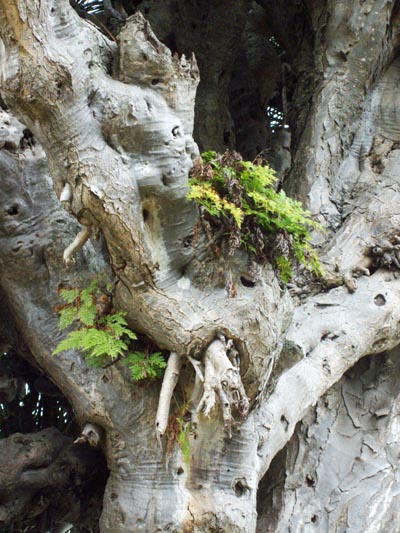 Dragon trees are odd plants (see Dragon trees). Like most mature dragon trees, these are so full of nooks and crannies that they’re more a micro-climate than a plant.

To see the trees, take the LP 123 between San Pedro and Monte de la Breña, and then the LP 301 up the hill. The trees are on the left, about 400 m from the junction. There’s a tiny car park.