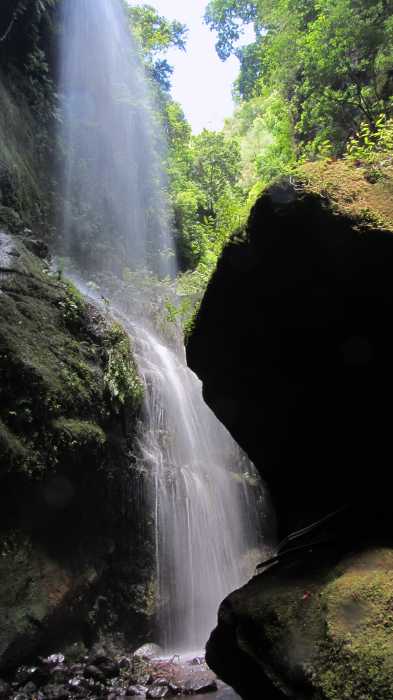 The plan was to drop off an invoice at the Tourist board in Santa Cruz de La Palma, then take my laptop to Los Tilos to write at the bar there, and maybe have a stroll. It took ages to find the power cord for the laptop, and then I had to let it charge for a bit while I read email for a while. So one way and another, by the time I got to Los Tilos, I only had time for a walk or a coffee-and-writing session. And the restaurant was shut, so that decided that. OK, I decided to go and get some photos of the giant fern Woodwardia woodwardia for the blog about La Palma. I followed the water channel upstream, since I haven’t tried that path before. I was wearing flat sandals -not too bad but they weren’t the best shoes for the job, and I had to watch my step. Then I found a tunnel, and I was very glad that I’ve taken to keeping a little torch in my handbag. And then the path detoured to the bed of the ravine. Oops. My sandale weren’t up to this. I’d have to go back, but first I wanted to find the bit of water channel making the noise, in hopes that it was photogenic. And round the next bend, I found a gorgeous waterfall. Silly me, I hadn’t even known about it. (I asked at the visitors’ centre, and they say it’s been there since the 1950s, and it’s running almost year round. I have to go back with a tripod.)